A fiction-heavy year, and a very big fiction tome in the last quarter, The Forstye Saga. I hope to post my thoughts about that later this month; it was an old-fashioned read, in a very good sense. Probably the most influential book of the year was Jaron Lanier’s earnest plea and disturbingly well-thought-through reasons for the vital necessity of getting off social media; once again, my brother Martin has led me to my big and important books of the year. The Hilton and the L’Engle were both lovely and affirming; most of the rest was okay but not outstanding.

Steve’s favorite was Robbie Robertson’s memoir; he was very interested in hearing this story of simple beginnings and Robertson’s being surrounded by very famous people-in-the-making. The matter-of-fact tone was very appealing. He also was very impressed by Salman Rushdie; we’ve both rather avoided him, thinking he’d be pretentious or literary, but he is instead a very good storyteller.

Nothing truly outstanding, as probably the only singer still in good voice of this set is Steve Forbert. Gordon Lightfoot in particular struggled. I think the concert was more of a personal triumph for him over age and infirmity, but he was so frail; it made for a rather sad and sobering experience.

Lot of works, lot of diversity, lot of thanks to Julie for all the shows at the Public (which now have the added thrill of seeing her name in the Playbill; so exciting!). The Puppet Festival, which we always look forward to, had one truly magical evening—Wunderkammer—which was haunting and poetic. We were privileged to see three highly talented and creative performers at the top of their craft, two discussing their craft: Bill Irwin, Twyla Tharpe, and Glenn Close. These were effortless master classes, a joy to hear and see people do what they do best. Bill Irwin’s observations and explanations were so elucidating: his sense of himself in space, and his repeated use of the word “silhouette,” was a fascinating insight. And I think seeing Twyla Tharpe smile was worth the ticket. Symphonie Fantastique was joyous; for a taste of this, click here: http://www.basiltwist.com/symphonie.html. The various storyteller evenings were uplifting and personal and friendly; we were glad we went. A couple were a bit too avant for us, maybe: High Noon, while absorbing and mesmerizing, was ultimately opaque. And at this point, I only dimly recall being puzzled by Leonora and Alejandro.

That’s pretty much the whole “first run” list—the movies we saw at the movies or streaming very soon after (often too limited) theater runs. Documentaries first: the best was the Gary Shandling on HBO, because it did what a good documentary should. It challenged conventional understandings by introducing facts and depth and different perspectives, bringing a richness to the portrait and dispelling a lot of myth. A lovingly made and intelligent film. At the other end of the spectrum was the crowd-pleaser Three Identical Strangers, which we found manipulative, biased, and simplistic. Steve’s favorites of the “fiction” movies were The Favourite, Wakefield, and Death of Stalin; Bryan Cranston’s performance in Wakefield he felt was particularly believable, and Death of Stalin was fun, with the always excellent Steve Buscemi. There were several strong femal 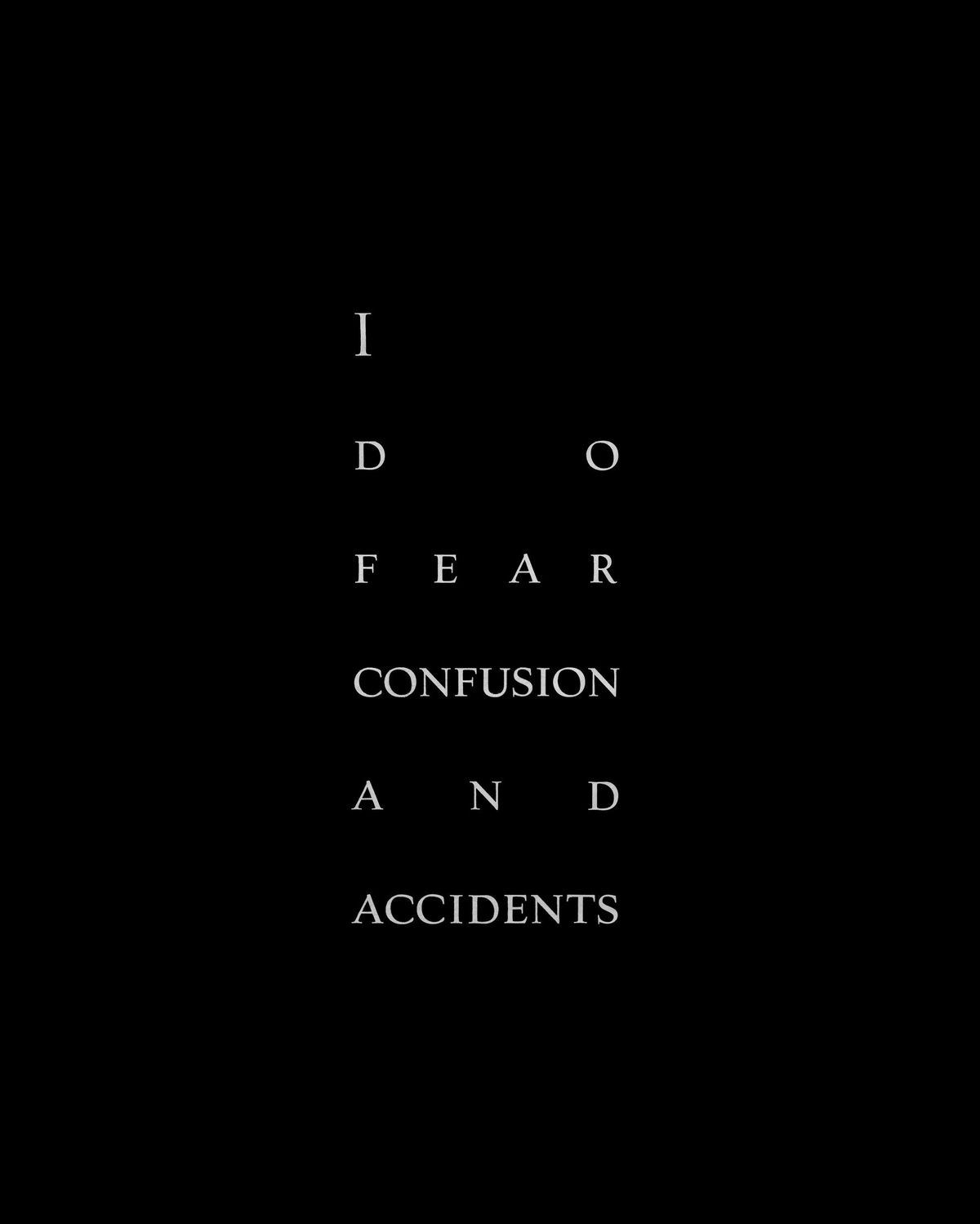 e movies on the list that I count as my faves of the year: Molly’s Game, The Favourite, and Our Little Sister. These very different films, with very different tones and themes, were united in having fearless and frank and smart heroines, who passed the Bechdel test with flying colors. I won’t elaborate beyond adding that I thought the title design for The Favourite (see a sample chapter title at right) was fantastic: someone made a bold choice and stuck with it valiantly, almost perversely, but with single-minded integrity and a touch of ironic whimsy—which to my mind, is the essence of good design.

I also must mention Lost in Paris and The Fairy. Discovering Abel and Gordon was an absolute delight. To prove this, watch this clip:

We watched or rewatched some classics on TCM as well; of these, I must single out the unexpectedly warm, funny, affecting, and affirming Roughly Speaking with Rosalind Russell, and the delicious The Young in Heart, whose marvelous cast includes Douglas Fairbanks Jr., Billie Burke, Roland Young, Paulette Goddard, and Janet Gaynor.

Now that my beloved Twin Peaks is more than a year gone, and the last of Mad Men watched and rewatched, TV has not had the same appeal, although we have become devotees of The Wire and, by extension, The Deuce.

Two museum trips this year: one to see the David Bowie exhibit at the Brooklyn Museum, and a visit to the Neue Galerie to visit the German Expressionists. The Bowie was very good, but a bit disconcerting until we caught on that the headphones played site specifically as you neared an exhibit. It was also all about immersion rather than comprehensive understanding: you were meant to feel it rather than analyze it. Notwithstanding, it was quite an experience and made us very sorry that this protean talent is no more. We also enjoyed visiting the Rodin sculptures; always so solidly, impressively majestic. Another field trip was occasioned by a sea voyage: crossing on the ferry in January at night, the motors were cut in Sandy Hook Bay and, looking out, I saw we were in a sea of ice. It was like being on the Titanic, cold and still and black and scary. And a fellow passenger said, “Well you’ve seen the mornings, haven’t you?” And when I said no, he told me that the ice was covered with seals in the mornings. So we found that the Littoral Society was hosting a seal walk in February, and went tromping all over Sandy Hook, rewarded with a bevvy of harbor seals sunning on a jetty. Quite the sight—and quite unexpected this close to New York City.

No really new recipes, but Steve has more than perfected his shrimp chowder and his blistered string beans. And of course, we have the lovely new stove to try all this deliciousness out on. Restaurant-wise, the new find was Cacio e Vino in the East Village. Which is some solace, given the closure of so many long-time favorites this year, including Café Español in the West Village.

A number of factors sort of coalesced to put us on a series of home improvement quests. We discovered an Asian furniture store in (almost) convenient Connecticut, and had quite the shopping adventure exploring the store and surrounds in Norwalk. Another home improvement highlight: an elegant

backsplash for the kitchen of ceramic tiles painted copper. They gleam and cast different light at different times of the day. And I painted the vanity doors in our bathroom, discovering this wonderful Art Deco style commercial artist, Frederick Packer, and tracing his lovely ladies on our doors.

The best part of all the new purchases was meeting and interacting with and learning from a whole host of friendly and informative and quirky and bright salespeople and craftsmen.

Steve describes it as the summer of two funerals and a wedding, and indeed these milestones colored and shaped much of the year. Julie and Yael married in August, and the wedding was lovely and the weather perfect.

The first funeral was not entirely unexpected, but that did not make it less sad or final. Steve’s mother, Ann Caporaletti, died at 96 in June. Then Steve’s sister-in-law Linda died quite unexpectedly two months later; despite her numerous illnesses, her death took us all very much off guard. And then there was a long wait for the funeral, which pushed it to the same week as Julie’s wedding. The juxtaposition colored everything, and I think we needed much of the fall to get back to ourselves.

Overall, a year of many events big and small, bookending lots of challenging work, and driven by a conscious effort to do and see and explore in our own low-key and unadventurous way.