Let’s start with the good stuff: Emily Mortimer, Bill Nighy, and Patricia Clarkson. Their performances were distinctive, intelligent, impeccable. In particular, Mortimer’s performance must be remarked upon. I have never seen a more real depiction of self-conscious awkwardness than she evinced in the almost painful scene near the film’s beginning, where she is meeting the elite of the community in which she has decided to open her bookshop. Her inner despair over her dress (which was nowhere near as ill-suited as she thought), her discomfort in engaging in small talk with strangers, perceiving every sentence she utters as inane (it was not) — Mortimer was staggeringly good. 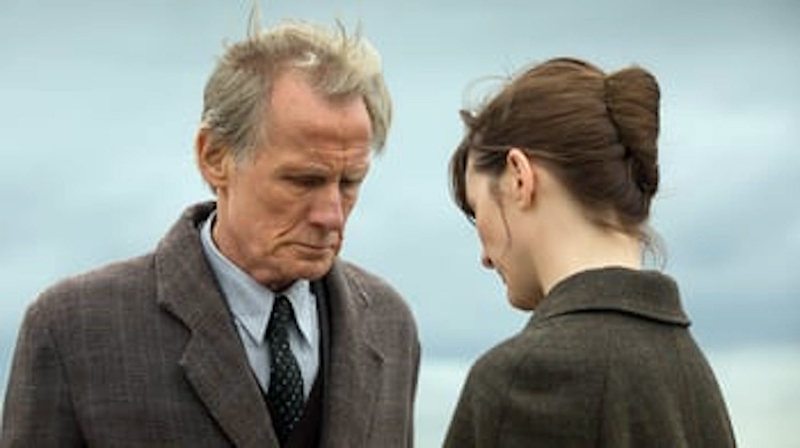 And when she and Nighy sat down to tea — or later, met on the shore — they utterly, achingly portrayed the plain reality of two shy, diffident people, molded by war’s losses, stiffly navigating awkward silences and hesitant declarations to somehow, almost miraculously, communicate inner grace and tenderness. Their stiff-armed, gawky, almost imperceptible lean toward each other on a windswept shore put the cliché to every easy melding of paired individuals in a similar setting: breaking out of oneself and toward another does not come easy to some. Patricia Clarkson, for her part, gave us a villainess for our times: wrathful, vindictive, bitterly petty, and unassailable; her blood-red slash of a mouth mesmerizing and haunting.

Also wonderful: the cinematography — I felt chilled to the bone in a landscape bleak as Haworth parsonage.

The subject matter too: a movie spent lovingly in and around and among books, with protagonists who live and breathe and literally wallow in books. Heaven, indeed. And I have to confess to having applauded in the theater when Bill Nighy’s character demanded more Ray Bradbury.

And too I came away from the movie wanting to read the book.

But that last virtue is also the beginning of my problems with the movie: I want to read the book because I couldn’t believe, at film’s end, that this was the message author Penelope Fitzgerald wanted to impart.

The Bookshop tells the story of Florence Green, who, by locating her bookshop in the workaday town of the aptly named Hardborough, rams headlong into the plans of the imperious Violet Gamart, social leader and éminence grise. The conflict is broadly hinted at by the women’s very names. For a while, it’s a straightforward good guy versus the oppressor narrative, and, as in Chocolat or Pride, you figure the heart of the community will slowly be won over by the forces of reason and righteousness and the dragon slayed, tamed, or shamed.

But as the movie progresses, and the injustices and unfairnesses pile up, you realize that the deck is totally stacked against our heroine. And, horrifyingly, the people of the community boldly, blandly, or abashedly rally around, not the Everyman, but the Oppressor. And it was then, when the nature of the adversarial relationship was almost ludicrously over the top — in Thelma Ritter’s words in All About Eve, “Everything but the bloodhounds snappin’ at her rear end” — that I stopped focusing on the story per se, which seemed a bit ham-fisted at this point, and yielded to a passionate interest in how the meek, mild, and powerless would confront the big, bad, and bellicose.

Seems very much a theme for today. How do you press to live a life of modest dreams and expectations when it is completely out of step with a political order established  to favor the rich and powerful? What tools or weapons are at your disposal to disarm, distract, deter, or defeat an implacable will that does not understand — and does not want to understand, has no way to understand — your values?

One character tries a direct approach and is destroyed. Another leaves: head held high, but defeated nonetheless. But the conflagrant approach that is seemingly endorsed by the film is, to me, completely wrongheaded. You cannot extol Fahrenheit 451, pin a (albeit ultimately fizzled-out) plot element on Lolita, and then suggest that by their extinction, good will arise phoenix-like from the ashes, without ever having to confront the force that threatened them in the first place. It should be axiomatic: burning books is a tragedy, never a solution.

1 thought on “The Bookshop”